Costly downtime from catastrophic failure was avoided when a conveyor drive pulley bearing mounting sleeve came loose and was found by NES on a routine condition monitoring survey.

Situation: During a routine condition monitoring survey of the conveyor drive components and pulleys the NES Consultant noted an increase in the vibration levels and harmonics indicating looseness around the drive pulley (see lower plot below). On closer inspection they noted unusual and significant movement of the whole drive assembly which was supported by the pulley shaft at one end and a torque arm anchor at the other end. The movement of the drive assembly was in time with the rotation of the pulley shaft indicating problems in the drive-side bearing.

Recommendation: The NES Consultant recommended site replace the drive assembly and pulley and conduct an investigation to find the causes of the movement found.

Response: Site staff arranged for the drive assembly and pulley to be replaced in a maintenance window and the new drive equipment reduced the vibration level and movement considerably (see upper plot below). A new set of readings were collected as a baseline for the new drive set.

Follow-up: The inspection of the removed drive assembly and pulley found the drive side pulley bearing sleeve had come loose and was rotating on the pulley shaft causing serious wear and generating large amounts of fine metal particles. The sleeve had broken (see photo 1) and had damaged the shaft (see photo 2) beyond repair. A bearing sleeve can only come loose when the correct mounting procedure is not followed at installation as the design of the mounting system has features that prevent the tightening/retaining nut coming loose.

Wrap-up: Early detection of the damaged bearing and sleeve has prevented the damage causing serious consequential impact to adjacent equipment and stopping the conveyor for an extended period. The conveyor in this situation is a feed conveyor for a coal preparation plant and can impact the output of the plant which reduces the amount of coal available to deliver to the port for shipment.

Future failures of this type can be avoided where the plant puts measures in place to ensure that repair workshops use bearing manufacturer installation guidelines to fit all rolling element bearings used. In this case final bearing clearances are provided which ensure the well lubricated bearing can roll correctly and be securely mounted on the shaft for the full life of the in-service pulley. 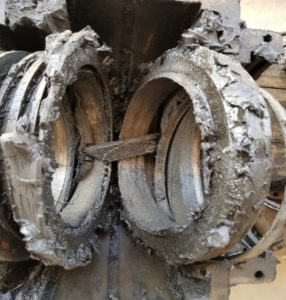