On a routine condition monitoring survey at a Hunter Valley coal preparation plant, one of the site Fire Pumps was found to have significant bearing problems which would have resulted in catastrophic failure of the pump when called upon in an emergency situation. This would have placed the site and staff at greater risk with limited ability to fight a fire.

The routine condition monitoring program picked up serious problems in one of the Fire Pump bearings that could have caused catastrophic failure of the pump and left the site unable to effectively fight a fire situation. The vibration readings showed a sudden increase in acceleration levels from 2.0Gs to 10.0Gs and increased noise levels in the 4 week period between surveys. The NES Consultant immediately contacted the site representative and advised that the situation was urgent and needed a prompt response.

Recommendation: The NES CM Consultant recommended the site arrange a replacement as soon as possible due to the unit being an emergency support asset.

Response:  Site maintenance staff followed the advice and arranged a replacement. The pump was replaced within a short period and the old pump sent to a repair company for overhaul.

Follow-up: Once the pump had been replaced the NES Consultant made contact with the repairer and arranged for the damaged components to be available for inspection. Inspection found one of the bearings had seized and deformation of rollers had taken place from excessive heat generated from the seized rollers (see photos below). The inner raceway was deformed and had indentations from the rollers and the shaft was severely scored from the spinning inner ring. The discolouration indicates the metal temperatures exceeded 700degC.

Wrap-up: Standby equipment such as Fire Pumps need appropriate maintenance strategies in place to ensure they will be ready when called upon. The routine vibration monitoring program on this occasion proved its value in detecting a ‘hidden’ failure with time to react and restore the serviceability of the unit ready for any emergency that may arise. Lubrication deficiency is assessed as a contributing factor in this situation and so this was also reviewed by site to ensure the unit is ready at all times for use. 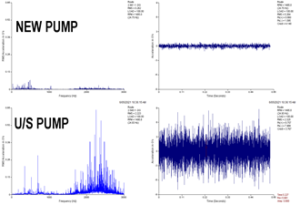