Significant downtime on a critical mine ventilation fan was averted when increasing imbalance was tracked over 4 weeks and timely action was taken to repair the problem in a planned and controlled manner.

Situation: During routine condition monitoring surveys on one of the main ventilation fans for an underground mine, the NES Consultant reported increasing vibration levels indicating imbalance. After a number of weeks of increases the level had reached a serious point where action was called for.

Recommendation: The NES Consultant recommended balance correction work be carried out with some urgency to improve the long term health of the fan.

Response: The site maintenance staff planned the fan outage and arranged for tradespeople to attend with NES staff to inspect and correct the condition. Cleaning of the impeller, NDT looking for cracking and performing balance correction work was allowed for. The cleaning and visual inspection found blocked water drain holes in the trailing edges of the aerofoil blades. These were cleaned out and a considerable amount of water drained from a few of the blades. NDT found cracking in the leading edges of those blades showing where the water had entered (see Photos).

Follow-up: Once all drain holes were cleaned and the water was drained out, the cracking was repaired by gouging and rewelding with correct preparation. Follow-up vibration tests showed the imbalance had improved to the point where further correction was no longer necessary so the work was completed and the fan placed back into service.

Wrap-up: High levels of imbalance in large ventilation fans can increase the rate of deterioration of bearings along with increased noise levels. Regular condition monitoring surveys enable the site engineers to keep close control over the condition of their equipment ensuring reliable and long term service.

Aerofoil blades have a history of accumulating water when high humidity air is carried over long periods and so drains need to be positioned and sized to suit the blade design. Impellers also are regularly cleaned using high pressure water blasting and this can lead to water ingress where cracks exist so drain holes ensure no water stays trapped in the blade during operation. 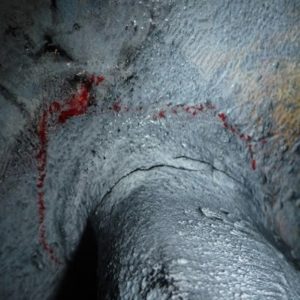 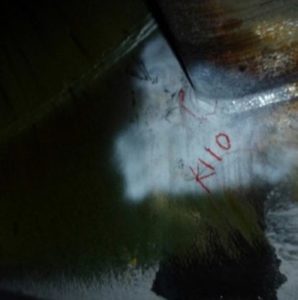