An unplanned and costly 24 hour mine longwall breakdown was avoided by Noble Engineering Services recommending replacement of a Beam Stage Loader gearbox due to a serious looseness detected.

Situation: Routine monthly monitoring of the longwall equipment by NES Consultants detected a developing fault within the Beam Stage Loader (BSL) gearbox that would stop the longwall cutting coal for at least 24 hours had the site not known about it and taken timely action. NES staff were able to identify the location of the damage and the severity which gave site engineers the information they needed to make the big decision to change the gearbox in the middle of a longwall block.

Recommendations: NES recommended replacement and repair of the BSL gearbox and close monitoring until the planned change could take place in case there were unexpected changes in condition that could have resulted in a breakdown.

Response: The site was able to safely and effectively plan and carry out the replacement of the gearbox saving considerable downtime and likely consequential damage to other parts of the drive system.

Follow-up: After the damaged gearbox was sent to the repairer, the strip-down showed failure of one of the input shaft bearings. This was due to a loose retaining shaft nut which had loosened over time to allow the split bearing to separate which then allowed the shaft to move axially (see photo). This investigation of the causes of the initial problem enables effective and targeted actions by site engineers and managers to ensure such problems do not occur in the future. NES have experienced and very capable metallurgical investigation staff in a well equipped laboratory who carry out all levels and types of investigations like this giving our many clients valuable information about the equipment they rely on and the service companies that keep them going 24 hours each day.

Wrap-up: Such failures are not common but early detection by our experienced Consultants avoided the significant downtime that this type of failure will cause to a mine operation. Spare gearboxes are not kept on site and need to be found and transported to the site from repair facilities which are generally a considerable distance from the site. Early warning and close monitoring of the problem enabled the mine to locate a replacement gearbox, have it delivered to the site, transport it underground to the longwall section and then have people and equipment ready for the planned change. 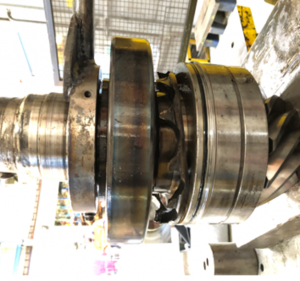